The Urban Adamah farm is situated on a two-acre site that is home to a wide array of perennial flowers, native plants, annual vegetables, animals, and learners. After a great deal of fundraising, planning, permitting, soil moving, and building, we began cultivating the land in 2017. Moving our operations and programs from a temporary site to a permanent home allowed us to establish vital habitat for beneficial insects and pollinators as well as infrastructure to foster education for the community. 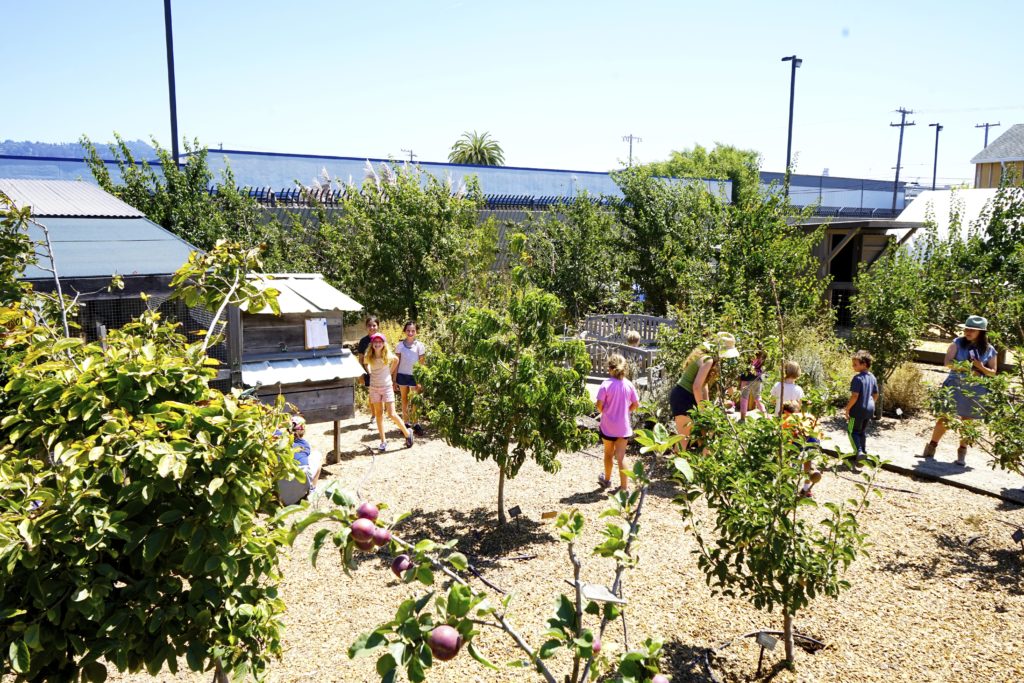 The Urban Adamah Farm is built on unceded land that was once home to the Ohlone Lisjan people. The abundance and diversity of animal and plant life sustained the Ohlone people for thousands of years until the area was overtaken by Europeans.

Centuries of tremendous ecological and cultural destruction forced the Ohlone people off of their land and largely obliterated their indigenous ways of life. Today there are hopeful signs of resilience and recovery. The local Ohlone community continues to organize to protect sacred sites and secure access to their ancestral land while endangered rainbow trout spawn in the re-wilded section of nearby Codornices Creek.

Urban Adamah recognizes and honors the native inhabitants of the land on which we have built the farm.

The First People of This Place

Urban Adamah recognizes and honors the native inhabitants of the land on which we have built our farm. Following is a brief overview of the history of Ohlone people in this area.

The highly productive ecosystems of the Bay Area formed an almost perfect living environment for Native Americans. Shellmounds, or small hills composed of ancient sea shells, food waste, and human remains indicate that there were Native American village sites in this general area 4,000 years ago. The Berkeley Hills provided shelter from winds, and salt marshes provided shellfish and waterfowl for food.

Just north of our site, where Cerrito Creek and Middle Creek meet at the foot of Albany Hill, mortar holes in rocks and deep deposits of shells remind us this was once a village site. The band of Native American tribes who inhabited this area are referred to as the Ohlone. The Ohlone sub-group that occupied the East Bay were the Ohlone Lisjan and spoke the Chochenyo language; their territory spanned from Oakland and Alameda in the south up to El Cerrito in the north.

Ohlone tribes traditionally subsisted mainly as hunter-gatherers and harvesters, moving across the year to gather seasonal foods like acorns and berries. Cultural arts included basket-weaving, ceremonial dancing events, female tattoos, ear and nose piercings, and other ornamentation. Ohlone villages and peoples interacted through trade, intermarriage, and ceremonial events. At its peak, the Ohlone population is estimated to have reached 10,000 to 25,000 people from the Bay Area to Big Sur.

Most of the Ohlone settlements of the East Bay were destroyed through contact with missions of the Catholic Church in the 18th and 19th centuries. Around the time California was ceded to the U.S. after the Mexican-American war (1848), Californians began to systematically slaughter native peoples who had survived the missions or had remained independent of them. By the late 1800s, the population of Ohlone tribes had dropped to fewer than 1,000 individuals.

As of 2005, there are at least 1,400 people registered on Ohlone tribal membership rolls. The federal government has and continues to deny Ohlone people any federal recognition, and their sacred sites continue to be threatened or destroyed as a result of urban development.

To learn more about the history of the Ohlone people, read The Ohlone Way: Indian Life in the San Francisco-Monterey Bay Area, by Malcolm Margolin.

Urban Adamah makes an annual contribution to the Shuumi Land Tax  / Segorea Te’ Land Trust to support their work to acquire and preserve land, establish a cemetery to reinter stolen Ohlone ancestral remains and build a community center and round house so current and future generations of Indigenous people can thrive in the Bay Area.

Local Ohlone Activist, Corrina Gould, leads the l community’s ongoing struggle for recognition, preservation of historic sites, and access to native lands. In the summer of 2017, Urban Adamah invited Corrina to the farm to share her knowledge and traditions, as well as to ask her blessing for repurposing the land we are on for the work we do. In recognition of the partnership we are building with, and our commitment to the Ohlone people, we have placed an abalone shell, gifted to us by Corinna, at the entrance of our site. The abalone shell recalls great grandmother ocean and grandmother moon, who help regulate the cycles of life. As visitors walk between the abalone shell on the left gate post and mezzuzah on the right, we hope they will be reminded of the connection between all peoples who have called this land home.

Corrina and her community’s ongoing struggle for recognition, cultural preservation, and access to land are described in the film Beyond Recognition. To learn more about current efforts to preserve local sacred sites, visit Indian People Organizing for Change and Sogorea Te’ Land Trust.

Urban Adamah makes an annual contribution to the Shuumi Land Tax  / Segorea Te’ Land Trust to support their work to acquire and preserve land, establish a cemetery to reinter stolen Ohlone ancestral remains and build a community center and round house so current and future generations of Indigenous people can thrive in the Bay Area.

Urban Adamah is nestled between a restored segment of Codornices Creek, the last working windmill in Berkeley, the Bay Area’s only kosher winery, Covenant, and Fieldwork Brewing Co., a hopping brewery and pub.

Codornices Creek Watershed today covers approximately 2.9 square miles of land and is comprised of a large network of streams, creeks, channels, and storm drains that carry water from Berkeley and Albany to the Bay. The creek is home to rainbow trout, serves as a resting place for migrating birds and is a nursery for aquatic life. The stretch of the creek that lies at the northern border of the Urban Adamah site was restored in 2011. Restoration of native habitat and removal of invasive species is an ongoing effort in which Urban Adamah participates.  To learn more about local efforts to conserve the watershed, you can visit Save the Bay and Friends of Five Creeks.

Join us on the farm!

Subscribe to our monthly newsletter and never miss an update.

*By submitting your email, you will receive our monthly newsletter, from which you can unsubscribe at any point.